Better Off Alone? Separatism in Europe: What Are the Forces Driving Independence Movements?
In Scotland, Flanders, Catalonia and northern Italy calls for greater autonomy, and even national independence, are growing louder. What are the forces driving these separatist movements? Are they a response to excessive centralism and the EU suprastate? Or are there economic reasons for the success of separatist parties? Kai Gehring, University of Zurich, sees the presence of economically valuable resources in a region as a key factor in the creation of separatist movements. In most countries there are transfer mechanisms that redistribute tax revenues based on these resources from richer to poorer regions. In many cases such transfers have created broad-based support for separatist movements. In his assessment of independence movements, Christian Schweiger, Technical University of Chemnitz, differentiates between the roots of trends towards renationalisation against a background of growing euro scepticism and regional efforts to achieve independence. Both developments have different roots and therefore call for different strategic responses. In the end they show, however, that a growing number of people in Europe are demanding subsidiarity for political decisions in response to the complex conditions of globalisation. According to Karsten Lenk, University of Göttingen, the incentives that drive separatist movements differ: the focus is mostly on the goal of a region gaining more political autonomy and power. This, however, would call for greater financial autonomy or even financial independence from the nation state. Klaus Schrader and Claus-Friedrich Laaser, Institute for the World Economy at the University of Kiel, highlight that although separatism is often heralded as an instrument for increasing a region’s prosperity, this perception masks the fact that the principles of a federal division of labour have driven back the model of the central state not only in Spain, but in the EU as a whole; and that prosperity cannot be created with isolation, but with political and economic integration. A one-sided independence from Spain would do significant economic damage to Catalonia. Gero Maaß, Friedrich Ebert Stiftung, Madrid, sees both sides as involved in the escalation. In his opinion, the response to this growing conflict should be a clear federal policy. 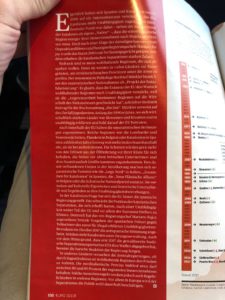 The “Institute Europe of Marketeconomy” (IEM) wants to be a compass (our logo) for the political and public discussion of the present and future of Europe (see attached document Re-thinking Europe). Cornerstone of all thoughts is the diginity of humans in peace, freedom and wealth on this only planet earth. The best expression of this European spirit we find in https://thetrueeurope.eu/ and its critic http://www.crisismagazine.com/2017/paris-statement-defends-old-europe-values