We remain Erhard supporters despite the contrary zeitgeist!

Ludwig Erhard is rightly being rediscovered because we have come to an increasingly dirigiste dead end politically, socially and not least economically as a result of Corona regulations. Many undesirable developments, e.g. the increasing “hounding” of dissenters, the government interference in the economy, too high dirigiste energy prices and taxes, the ruination of the self-employed and cultural workers through exaggerated, senseless, undifferentiated bureaucratic controls, are not being questioned enough.

Where are the freedoms and fundamental rights? The state intervenes ruthlessly, scientists and bureaucrats are given power that is difficult to wrest back from them. The Corona pandemic regulations could be misused for political experiments. Instead of accepting this uncritically, we at the Europe of Market Economies Institute try to ensure a timeless and value-based orientation of our regulatory compass. It is precisely then that it becomes apparent that there is an increasing need for reform. For example, today’s populist and anti-democratic autocrats everywhere are in clear contradiction to Ludwig Erhard’s liberal, democratic and economic policy ideas.

The integration of the new federal states into Germany cannot refer to Erhard. It has not been satisfactorily achieved to date. This is shown by the electoral successes of the SED successor party “Die Linke” and the AfD. Citizens are dissatisfied and no longer feel understood by their politicians, who have increasingly lost their grip on the ground. The CDU and CSU in particular are called upon to set the right course again here. Erhard’s policy should not be just lip service, it should finally be followed by action. It even remains to be asked whether Erhard’s teachings are also being more and more deliberately misinterpreted by the functionaries of these parties today? Our Minister of Economics, Peter Altmaier, with the expansion of the state’s power through the Corona pandemic, is meanwhile already being described as “anti-Erhard” (Source: Spiegel).

To cope with the Corona pandemic, our leaders are relying on an all-powerful state with all its sanctioning powers. The new centrally controlled chancellor’s dirigisme is not convincing. The competence of the states is being eroded ever more ruthlessly. Corona has become a matter for the boss, who thus gets the reins back in her hands and accepts the inefficiencies as collateral damage. In the face of ever new rules, digitalisation that is not citizen-friendly, technical deficiencies in distance learning at schools, curfews and shortcomings in vaccine provision, much trust has been squandered. The constant control of citizens, who were increasingly being harassed, led to avoidance behaviour. Ludwig Erhard would certainly have placed more emphasis on the individual responsibility of the citizens, incentives for their solidary behaviour in the crisis and solutions on the ground, especially at the hotspots of infection such as old people’s homes (as in Tübingen, for example).

In this respect, the Bundestag election in September 2021 will be a liberal directional decision. “Personal responsibility or dirigisme?” It is not about supposedly temporary phenomena of pandemic control or zeitgeist, but about the question of whether we allow a fundamental transformation to a digitally controlled, green-wrapped rationing society. The Corona pandemic was then perhaps only a play to enable such a “semitotalitarian system transformation” (Max Otte). Let’s stick to its citizens and their basic democratic rights, which they should use now more than ever. Let’s focus to the market economy and not to a nationalisation of all spheres of life!

Are our party officials still representatives of the people? Ludwig Erhard felt much more attached to the people, even to the so-called ordinary people, than to the functionaries who supposedly represent the interests of the people. In this way, they are degraded to the status of recipients of benefits and are subjugated. Erhard wanted to overcome this servitude, give people courage and enable them to rise. Ludwig Erhard thought of society from the bottom up and not from the top down, controlled by the state. Like cartels, he rejected state growth targets. For him, a free economy without sinecures was also social. A flourishing market economy is the most social because it enables the majority of citizens to master their lives on their own responsibility, without the support of the state. Only when this is not possible does the state have to step in. According to Ludwig Erhard, any more than that is not economically justifiable.

Collectivism, which is hostile to freedom and democracy, has, as has been shown, failed historically; we should not make it possible again in a roundabout way. That is the credo we share with Luise Gräfin v. Schlippenbach. She advises us and is turning 99 these days. Countess Schlippenbach was a press officer for Ludwig Erhard and her clear statements are timeless. With her and many other authors, we produced the booklet “Ludwig Erhard jetzt” in 2015. In the closing words of Luise Gräfin v. Schlippenbach expresses her decades of experience and knowledge also of the unadulterated teachings of Ludwig Erhard’s Social Market Economy:

“Despite striking examples, such as the collapses of the Russian Federation, the GDR and many others caused by wrong economic and social policies, people hope again and again – as long as the world exists – that the “sweet poison of the leftist illusion” against all rationality could after all be the “healing balm” to more humanity, less workload, less capital market, renunciation of stress and saving, so that the “economy serves the people and not the people the economy.” Justice, “one for all, all for one”, the solidarity community, and all that, made possible by a strong father state. But there was always the end: Debt, collapse of the national economy, fiasco.

Unaffordable: the welfare state. But the Christian-humane welfare state with its limits set by Adenauer and Erhard is very affordable. But must not all appeals to reason fail? Or is there still an awakening, the will to rethink? Also and especially for our children and grandchildren in their responsibility for the next generations, for more intergenerational justice in Europe and – as Erhard hoped – in the entire Western world? Another illusion or is Erhard a visionary?”

About the authors:
Stephan Werhahn, Director of the IEM and Dr Ulrich Horstmann, IEM board member and author of the book “Back to the Social Market Economy” (2014). Both authors were co-authors of the book “Ludwig Erhard jetzt” (2015) and “SOS Europa” (2016, both published by FinanzBuch Verlag in Munich). 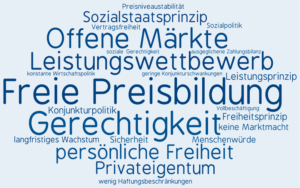 PrevPreviousThe European Union after BREXIT
NextEurope struggles with pandemics and digitalisation – Is a society of subjects looming?Next